It hit me as I was standing in the rain a hundred yards from the studio, watching aghast as a telecoms engineer pulled handfuls of cable out of what can only be described as the inner workings of Optimus Prime.

Why am I here?

Not a philosophical version of the question, but a literal one. What the hell was I doing trying to get this guy on the phone to a ‘customer service’ agent on the other end of the line? Shouldn’t they be talking to each other rather than getting the customer to run around trying to hook them up?

An hour or so before, an elderly, disabled couple down the road had started receiving all of our office calls. I’d been surprised at how quiet the day had been up to that point; until a client called my mobile and asked who the somewhat confused chap answering our phone was.

A quick sprint up the High Street gave me my answer. A telecoms engineer had apparently driven all the way from South Wales in order to open a hole in the pavement and break our phone line. To be fair to him, he admitted that he was at fault and that he’d try to get it sorted by the close of play. Before he had to drive back to Wales. Late on a Friday afternoon. 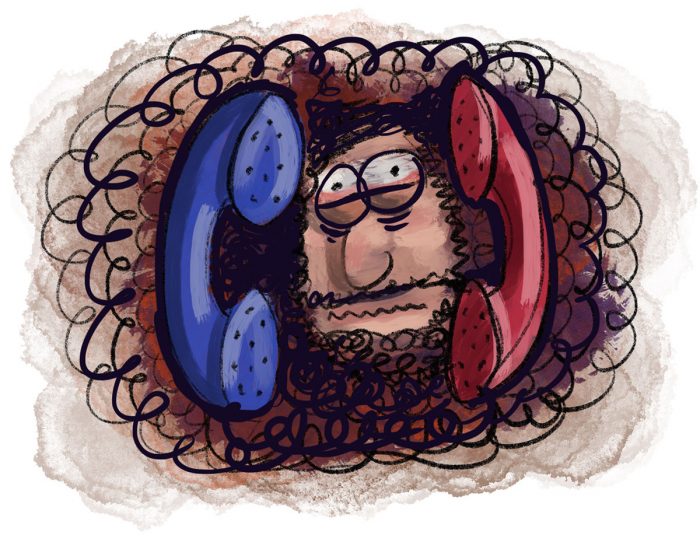 Being a business client of… let’s call them TB, I had hoped that the massive premium on our bills would afford me some sort of customer care. I therefore optimistically called the TB Business faults line and told the lady who picked up after 20 minutes that an engineer outside had ruined my day. She offered to book in a new engineer to come and fix the problem.

“No need” said I. “I’ll just pop outside and put him on the phone. You can ask him to fix it”.

I thought she must have misunderstood and I took the conversation outside. Standing behind the engineer as he worked, I tried again: “I’m here with the engineer now. I’ll put him on the phone so you two can resolve this and I can go back to work.”

“Furthermore, if the engineer there fixes the problem before the new engineer comes out, you (Tinstar) will have to pay a callout fee to compensate TB for the inconvenience.”

Try as I might, I simply couldn’t come up with a rational response… The call went downhill from there.

Like so many of the calls I make to TB, I was left deeply unsatisfied with an unresolved problem and the feeling that they might want to take another look at their business model.

What made things worse was the fact that the unfortunate couple who’d received all our calls would, as residential clients, receive compensation for every day that their service was out of action. As a business client, all I received were threats and a much higher bill.

The Moral of the Story

I think this is self-evident… and it’s not just the company in question that needs to revisit their customer service protocols. Smaller companies suffer from the same problem – the element of common sense, rationality and a good, old fashioned ‘customer is always right’ approach is increasingly lacking in today’s market.

For example, there was that time that I re-signed with my energy company on a lower tariff and the site went down seconds before the tariff changed to a higher price, which meant that my request came in literally seconds too late. “Could you please honour the tariff I had attempted to sign up to?”

And then there was the time I tried to renew a domain name on a hosting provider’s website. I had to upload a utility bill to validate the address shown in the registration area. The bill had left off the county ‘Hampshire’ from the address, but otherwise the addresses and postcodes were identical and obviously genuine. Furthermore, the website would not allow me to omit the county from the online form even if I’d wanted to. So “could you please use your discretion and confirm that this is clearly the correct address?”

Without wishing to blow our own horn, at Tinstar we have always put customer satisfaction ahead of any other consideration. By doing so, we are able to (and are compelled to) provide much better services and products. I appreciate that the bigger the company becomes, the harder it is to effectively manage their myriad staff and services; so it’s almost inevitable that the customer suffers.

What’s the answer? Stop trying to be the biggest. Try instead to be the best.

I must say, the phone has been rather quiet again today…

*With thanks to Little Britain…